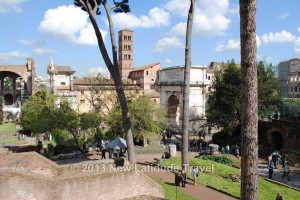 The 1st century AD Arch of Titus looms large upon entering the Roman Forum.  One of many such honorary or triumphal arches in Rome (and elsewhere in Europe for that matter), it was constructed as an homage to Emperor Titus by his brother, Emperor Domitian.  Titus earned fame within the Roman Empire for leading many successful military campaigns, including the destruction of the Second Temple and much of Jerusalem during the First Jewish-Roman War in AD 70.

After admiring the Arch, we walked up Palatine Hill,  one of the famed Seven Hills of Rome.  According to legend, it was here that the wolf Lupa found the infant brothers Romulus and Remus and nursed them to health.  This foundation myth later finds Romulus founding the city after murdering Remus. As you can tell, the name Rome stems from Romulus.  Whatever the truth about the start of Rome, archaeological evidence shows that human settlement at this location dates back to at least 1000 BC. Today the hill is a pleasant spot of greenery and lovely ruins…plus striking views over the Forum below. 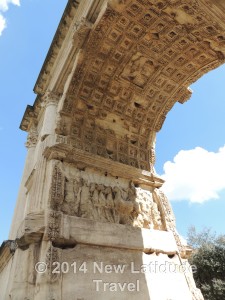 Originally a marketplace, the Roman Forum was the heart of ancient Rome.  Like town squares and plazas the world over, it was the site of political speeches, victory marches, commerce, and everyday public life for Romans of all classes.  At one time this plot of land was a damp field that often captured runoff from the nearby hills.  Once drained in about the 7th century BC, it gradually morphed into the center of Roman activity.

We spent a solid afternoon exploring and soaking in the ruins of the Forum…temples, statues, former residences and official buildings, cobbled streets.  Even more so than the Colosseum, it was easy to feel transported back to those days long gone and sense just a little of what Roman life once was.  Superficial differences aside, we’re still living much the same way.  Our town squares and forums are decentralized into shopping malls, strip malls, and digital versions of the commerce, debate, and speeches that once took place face-to-face.  Supposedly all of these things represent “progress”, but I wonder if it really is.

Ruins at the Forum, Rome

View From Palatine Hill (Basilica of Maxentius & Constantine on Right) 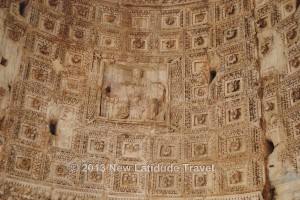 Detail from Arch of Titus