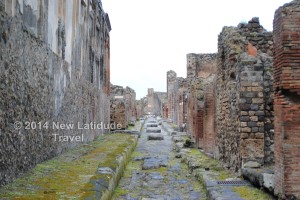 Small side street of Pompeii

There are so many amazing things to see in Pompeii.  One of my favorites was actually the streets.  Naturally they are all nicely planned out and well constructed.  Raised stones in various spots served as a means for pedestrians to cross without stepping into the often dirty water flowing down the roads.  These “crosswalks” were cleverly spaced such that the wheels of chariots could still pass through.  In fact, the wheels of the carts and chariots of ancient Pompeii eventually wore ruts and grooves into the cobblestones.  Little details like this are what often stand out to me.

Where do the streets of Pompeii lead?  Well, people back then went out to eat just like we do.  The round openings in this brick structure, part of a food stall, once housed large pots of stew and other yummy stuff.  There were several of these restaurant/food stalls around.  I wonder which ones were the most popular and who made the best food?

These once held “crock pots” in a food stall at Pompeii

Across from this food stall sits the remains of the Roman baths.  This was one of my favorite parts of Pompeii actually.  I could easily visualize the social activity that would have taken place here – gossip, tall tales, perhaps business deals.  Besides that, the baths were fairly elaborate.  There is a locker room of sorts, with cubbyholes for patrons to store their clothing.  In addition to an outdoor courtyard area, there are two main bath areas.  One is a “cold bath” with a nice round pool.  The “hot bath” is the icing on the cake though.  Hot embers were kept underneath the floor in order to keep the room toasty – hollow walls allowed the heat to rise all around.  At one end a fountain of hot water continuously poured out onto the floor ensuring a constant steam throughout the room (the fountain is inscribed with the names of the wealthy donors who paid for it!).  A system of grooves and channels in the ceiling and along the interior ensured that condensation was channeled out of the room rather than dripping on patrons’ heads.  All in all, this was a better facility than my local YMCA! 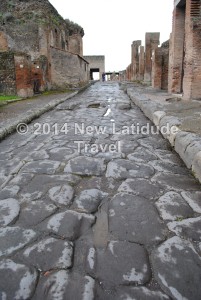 Notice the ruts from chariot wheels

3 thoughts on “The Streets of Pompeii”