Courtyard inside the Camposanto

Believe it or not, there is more to see in Pisa’s cathedral square than just the famous tower.  My personal favorite is the Camposanto (“holy ground”) – a large Gothic cloister burial ground constructed in 1279 around soil brought back from Golgotha, the site of Jesus’ crucifixion.  The outer walls of the Camposanto are fairly plain on the outside but is beautiful on the inside.  Despite this, it seems to draw relatively few visitors compared to the masses snapping photos of the Leaning Tower.

The rectangular structure surrounds two lovely courtyards of bright green grass.  The building itself contains, of course, burials in various forms – sarcophagi, memorial plaques, and tombstones laid within the stone floor.  Many of the sarcophagi are “re-purposed” ancient Roman ones.  Various sculptures were gradually added to the interior over the centuries.

Inside are three chapels as well.  One of the chapels, which is open to visitors, contains a number of holy relics including from eleven of the Apostles, a fragment of dress from the Virgin Mary, a piece of the True Cross and a fragment of Christ’s Crown of Thorns.

The artistic crown jewels of the Camposanto are the amazing frescoes which were begun in the 14th century.  Sadly, extensive damage occurred to the frescoes as well as many tombs, when a stray bomb fragment lit the wooden roof on fire during World War II.  Salvage efforts began afterward and restorations are still taking place to this day.  A great deal of the restored frescoes can be seen by visitors and one can also watch some of the restoration work being done.

Stepping inside the formidable walls of the Camposanto brings the visitor into another world away from the commotion in the rest of cathedral square.  The quiet dignity of the cemetery, the breathtaking frescoes, and the artwork on and around the burials are a wonderful thing to experience.  I would highly recommend allowing at least an hour if not more to really appreciate the Campo Santo. 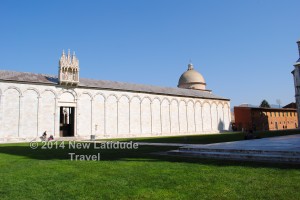 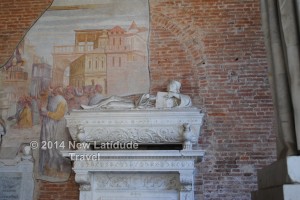